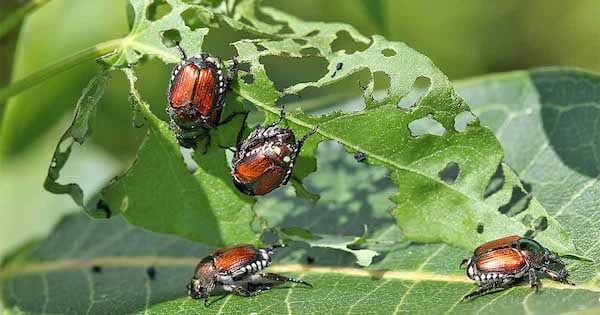 There might be a menace lurking in your backyard. It may not be visible yet, but it’s there, just waiting for the right time to emerge and wreak havoc on your plants and trees. You probably know by now, we’re not talking about the bogeyman, we’re talking about the Japanese beetle. While most bugs you’ll find in your yard are beneficial for the environment, the Japanese beetle is one of the very rare invasive species that you have to worry about.

So, here’s what happened: around 1916, a batch of iris bulbs arrived at a nursery in New Jersey by way of Japan, completely infested by these beetles. Since then, these non-native beetles have steadily made their way westward and now exist in 34 states. Because they are foreign to this country, they have no natural predators. That’s why when they arrive in your neighborhood, they have the potential to cause big problems. Here’s what you should know.

Japanese Beetles do harm as both larvae and adults. These beetles spend most of their time in the grub stage, where they stay underground and feed on the roots of your turf, causing large spots of brown, dead grass. From June to August, these grubs become adult beetles and emerge from the ground to terrorize the rest of your yard.

These beetles wreak havoc on trees and shrubs. The damage these little bugs can cause can be devastating, and for homeowners, there is scarcely anything more frustrating than something so small causing so much damage. Once they emerge from the ground, their only mission is to feed on whatever species of trees, shrubs, fruits, vegetables, field crops, weeds, and flowers they can. There are over 300 plants these beetles are happy to dine on. Some of the most popular are Linden & Birch trees, roses, any ivys and Buckthorns, to name a few. They do this for about two months until they lay eggs and start the cycle all over again.

The pests are hard to eliminate completely. One of the most important things to understand about these beetles is that they are an invasive species. That means that they are very difficult to eliminate completely. You could potentially perform treatments, both chemical and by hand, that get rid of every single Japanese beetle on your property. But unless every other homeowner in your neighborhood does the same thing, they will eventually make their way back.

It’s about taking as much control as possible. You can take steps to minimize the risk these beetles pose to your yard. If you haven’t already added grub control to your fertilizer program from SunCo, that should be your first step. This helps control the proliferation of grubs beneath the ground. We also offer a 3-step Japanese beetle spray application that targets the beetles and the plants they are most likely to enjoy.

What other steps can you take? There are a few other techniques you can use, with varying degrees of success. Manually picking bugs off the plants and placing them in soapy water is one technique that, though labor intensive, can make an impact. Setting specialized traps can catch quite a few beetles but can actually be detrimental by attracting more than they can actually hold. One proactive step you can take is to avoid plants the Japanese beetles are least likely to eat and plant those. Some suggestions are boxelders, sweetgums, various oaks, hollies, or tulip trees.

Japanese beetles are absolutely one of the most troublesome pests you will encounter in your yard today. But, you are not powerless. Let SunCo help you take control of the situation and keep this invasive species away from your lawn and plants. If you would like to learn more about our Japanese beetle treatments, click here to get a free quote today.

The Importance of Fall Aeration and Overseeding