Bird Watching in the Winter

When is the Best Time to Start Your Garden?

Bird Watching in the Winter

Did you know? Winter is the peak season of bird watching in the midwest. During the winter and early spring, birds are migrating from place to place. Nebraska is known for the great spots you can get your eyes on many types of birds. Below we have gathered a list of common birds you might catch a glimpse of if you decide to bird watch this winter.

Although this bird is commonly known, there is something thrilling about seeing a group of them together while bird watching. According to the Iowa DNR, the eagle population rises from 500 to 3,000 during the winter months in the midwest. During the eagles’ migration, they are usually found soaring above open water to hunt their food. A prime local location to watch eagles live in their natural habitat is the Lock and Dam No. 12 in Bellevue. This location gives watchers great eagle views. 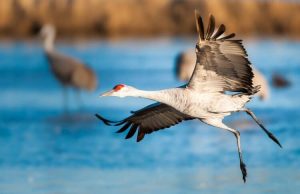 The most common time to watch for these birds is between February and March. Sandhill cranes are known to migrate along the Platte River. The tall, mostly gray birds with a red patch on their heads can usually be heard by their repetitive “graaaaahk”. The sandhill crane can be spotted over wet prairies and large marshes. 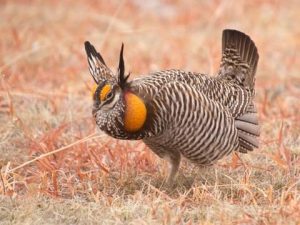 These types of birds appear in the panhandle of Nebraska during the winter. The greater prairie chicken is a large bird in the grouse family. Bird watchers are always on the lookout for this type of bird due to their small population. One of the most known facts about this species is their mating ritual called booming. Although these birds do not migrate, they can become very territorial of their booming grounds. 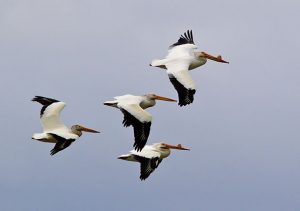 These types of pelicans can be found at the Harlan County Reservoir in south-central Nebraska. They are known to move north after feeding in the south. This bird is usually found near marinas, campgrounds, and other shorelines. Unlike other flocks, the Harlan white pelican moves around from place to place on the lake.

Bird watching can be such an experience. If you are interested in any upcoming birding festivals, here is a list of some founded in Nebraska.

Have you bird watched before? We would love to hear/ see the kind of birds you have spotted in Nebraska. Feel free to share your experiences by posting.